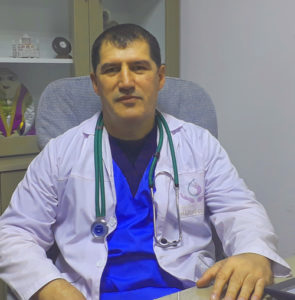 He began his labor activity in 1995 at the Tajik State Medical University named after Abu Ali ibn Sina. After graduating from TSMU in 1995-1996, he underwent an internship (under the guidance of Professor V.L. Tian), in 1996-1998 he took an internship (under the guidance of leading scientists: Doctor of Philosophy, Professor T.R. Kodiri and Professor A.S. Osimi) under the urology program at the Department of Urology of the University. After completing his clinical residency in 1998-2001, he worked as a urologist at the National Medical Center, at the same time was engaged in scientific and creative work and became a graduate student of the Department of Urology.

In 2004, he published a dissertation on the topic: “The state of renal function in normal and severe pregnancy” under the guidance of Dr., Professor Kodiri T.R. He successfully defended his thesis and received the degree of candidate of medical sciences.

For his scientific achievements in 2006 he was awarded the Ismoili Somoni State Prize by the leader of the nation.

With the support of the Government of the Republic of Tajikistan under the program of the Center for International Programs “Durakhshandagon” in 2006-2010. studied in doctoral studies at the Department of Urology of St. Petersburg State Medical University named after I.P. Pavlova and received his doctorate in 2010 on the topic: “Comparative assessment of modern methods of treatment of chronic prostatitis” in St. Petersburg, Russia, under the leadership of Dr. Salman Khasunovich Al-Shukri. The therapeutic methods proposed by him are recognized as intellectual property and awarded 6 certificates for the exercise of the rights and privileges of the inventor.

He is also a full member of urologists in Russia and Europe.

In addition, he works in the field of medical education and publishes textbooks and manuals. Also under the leadership of Solikhov Dilshod, 3 young scientists defended their dissertations.

During his scientific career, he published more than 180 scientific papers, including 80 articles in prestigious international journals, and also presented papers at international congresses and conferences as a representative of Tajik scientists.

Dilshod Nigmatovich is engaged in the diagnosis and treatment of the following diseases:

20% discount in honor of the Constitution Day of Tajikistan

The days of admission to the nephrologist surgeon – Rohit Junja and the surgeon Vivek Sinha were postponed to November 24, 2021